The end of 2021 brought the RMRU team a flurry of rescues on a popular trail that leads from the Palm Springs Desert Museum to the Upper Palm Springs Tram – the Skyline Trail (C2C). This rescue was the third consecutive day on that trail for us. Tuesday evening RMRU received call about a hiker that had reached the snowline at about 7,000 feet, felt unsafe and called his girlfriend who in turn called 911.

The team was initially headed to the Palm Springs Tramway when our call captain received word that the Riverside Sheriff Office (RSO) had managed to call the hiker and determined that he was not in any particular distress, and he had made the decision to hike back down to the Desert Museum where he had left his car. We were re-directed to set up our Command Post (CP) at the Museum. During the hiker’s descent there was periodic cell phone contact until approximately 7:00pm. 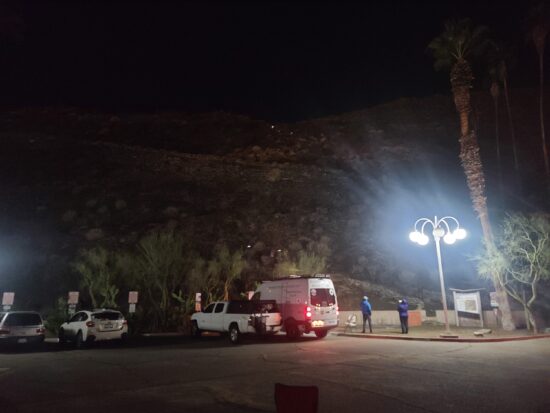 PHOTO: Tyler,  Vinay and Blake bringing the subject down the skyline trail.
They are the faint white dots at the top of the picture.

At that point, the team sent Tyler, Blake, and Vinay to try and reach the hiker. About 45 minutes into our climb, we saw a headlamp on a ridge a several hundred feet above our position and hoped that this was our hiker. After another ½ hour of hiking up, we met up with him and performed a basic medical assessment.

He was in good shape, so we all came quickly down the rest of the way to the Museum and safely handed him over to the RSO deputy who arranged for an ambulance crew who assessed him more thoroughly and released him. Overall, a safe and uneventful rescue!