Another snowstorm, another callout. ‘Tis the season.

This call came just after 4pm on a Friday, following a week of on-and-off snow throughout Southern California. Our only information was that our subject was on Skyline.

My first thought was “...I bet this guy didn’t read my last mission writeup.” The upper regions of Skyline were already under more than a foot of snow the last time we were there in late November (11-30-2019 Skyline Rescue) and the additional snowfall had certainly wiped out whatever tracks remained, plus this was literally the day after the storm- this guy would be breaking trail for the majority of the 20-mile hike! Most of the online publicizing for Skyline describes it as a trail to be done as quickly as possible with a minimal amount of gear and suggests staying away from it in inclement weather or heavy snow conditions. Our last Skyline trip had taken seven hours...this was shaping up to be worse.

Fortunately, call captain Gwenda Yates called me just as I reached the Badlands and redirected me to the RSO hangar at Hemet Ryan. I had mentally ruled out the possibility of a helicopter but, Christmas miracle, they were available and the weather was agreeable for the moment Since this is likely to change at a moment’s notice in San Jacinto, we prepped for an overnight anyway, but kept our fingers crossed. Cameron and Glenn would also be coming to RSO hangar at Hemet Ryan as backup if more members were needed in the field. We always try to have backup members ready to go in case the mission changes.

Our subject had gotten off trail around the 7000’ level and was reportedly in an ideal spot for a hover step (in which the helicopter doesn’t actually land, and the technical flight officer, or TFO, assists in loading and unloading people and equipment). This would be my first hover step in the field, assuming all went as planned. Since the TFO needs to stay on the helicopter to provide guidance to the pilot, I would jump out, assess the subject, and help load him if he was mobile. Ideally this would take no more than a minute or two...much better than a seven-hour hike.

Almost as soon as we approached the skyline ridge, we spotted the subjects cell phone light, overlooking a southern drainage. As we approached, his light abruptly turned off, and despite asking him to turn it back on using Star 9s loudspeaker, there was no response. I was beginning to assume a dead battery, or worse, hypothermia, when the light suddenly reappeared and we were able to target him immediately. He was on a crescent-shaped overlook about 20 feet across with trees and boulders framing him like a small amphitheater.

The subject took cover as we approached and smoothly entered a hover, with the lower skid only a few inches above the snow...which is no guarantee of how far down I’ll go when I jump off. The TFO and I do a quick forearm-to-forearm grip and lower me down to the skids, and I still sink up my highs in snow when I hit the ground. As a little parting gift, the helicopter shocks me as I grab the skid to stabilize myself - a side effect of the fresh snow and the spinning blades.

The subject assures me his gear is accounted for and securely fastened in his pack, and we turn around - it feels like walking into a wind tunnel. When he reaches for the TFOs hand, the subject is shocked...and when he reaches again, and again, each time pulling his hand back, thinking something is wrong. The blue arcs sparking between their hands are intimidating and the shock itself actually hurts, but once you’ve been shocked, you just must hold on- you’ve grounded yourself and can’t be shocked further. I yell for the subject to just go for it, and he gets the idea and holds on his next try, the TFO pulling him in. I go up a moment later, although not before I managed to bang my knee on the skid, hard enough to feel it now a day later.

From there it was just a quick flight down to the tram parking lots to drop him off with Cabazon deputies and a happy reunion with his family, then we headed back to Hemet Ryan. Total mission time in the field was less than an hour. 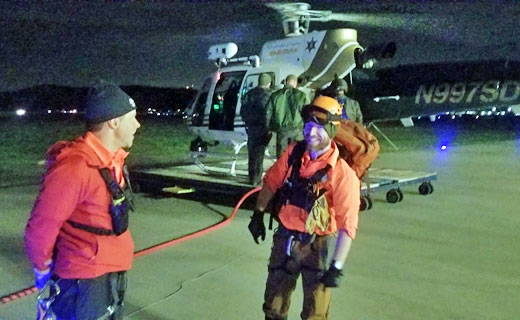 Our subject was almost totally unequipped for the conditions. I can say with confidence that without the helicopter, he would have been hypothermic by the time we hiked to him, and ground extraction would have been extremely difficult at that point.

The bright side is that 1.) after calling for help, he stayed put as requested, and 2.) he called for help more than an hour before sunset.