Our sincerest condolences go out to the family and friends of Chelsea Walsh and Gavin Escobar. The two climbers died in a fall from Tahquitz Rock (Lily Rock) on Wednesday, September 28th. Herein we present our observations of the climbing system and the route, a timeline of events as provided by eye witness accounts, and what we believe occurred.

Riverside Mountain Rescue was notified of a climbing accident on Tahquitz at 12:40PM involving two subjects, one of whom was deceased. We staged at the Idyllwild Forest Service Station and were notified that a rescue technician from Star-9 had pronounced both subjects deceased, and we would be required to assist in their transport. Idyllwild Fire hiked up to the subjects and confirmed the pronouncement. We hiked up to the base of the rock, near the start of The Trough with USFS fire personnel, collected evidence, packaged the subjects and hoisted them with Star-9, finishing before 6:00 PM. In the following days, we returned to the scene of the accident and worked with the coroner to gather more evidence. 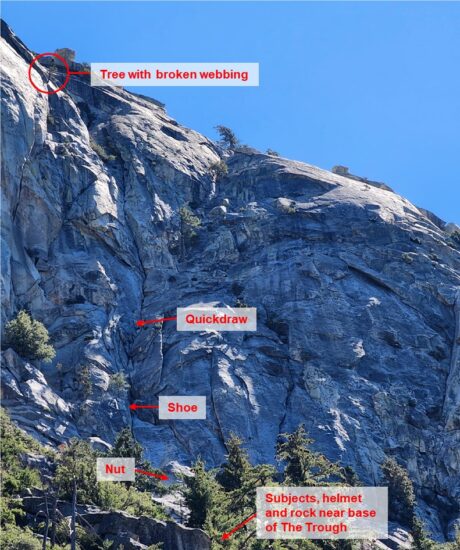 Figure 1: Overview of the West Face of Tahquitz Rock noting locations where evidence was found.

The two climbers were found at the base of the gully below The Trough at treeline (Fig. 1). Both climbers were wearing helmets, harnesses and climbing shoes at the time of the accident. Both had a near equal number of cams and quickdraws racked on their harnesses. Gavin was carrying a partial set of nuts, and Chelsea was wearing crack gloves. Chelsea had a PAS girth hitched through her harness with a locked screwgate at the far end, an unlocked screwgate clipped to an ATC and an unlocked screwgate clipped to a hollow block (Fig. 2A). Chelsea was not connected to the rope or any anchor material. Gavin had a single length sling girth hitched to his harness’s tie-in points with an unlocked carabiner clipped to the sling and the belay loop (Fig. 2B). Additionally, an ATC was attached to his belay loop with a locked screwgate and both strands of the rope running through the ATC and through the screwgate. There was a four to five foot loop of rope extending from the top of the ATC with two opposite and opposed wiregate carabiners clipped to the rope. These carabiners were not connected to anything else. The rope had some sheath damage to the area around the ATC and significant sheath damage a few feet below the ATC, but there were no breaks present. Each end of the rope had a single figure 8 tied into it, one loose and one hand tight (Fig. 2C-2D). 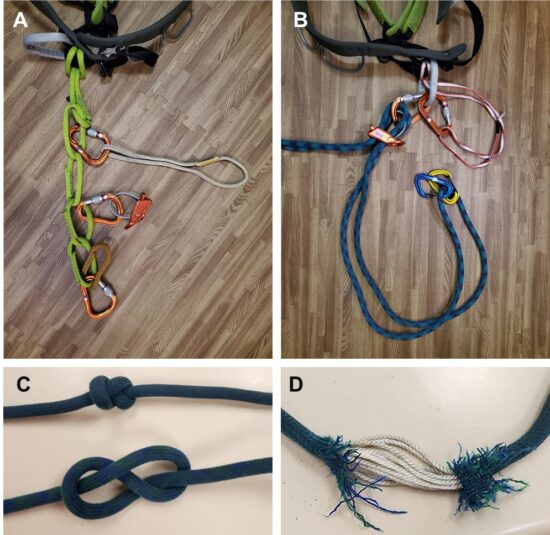 A broken piece of tubular webbing was found wrapped around a tree close to the start of Upper Royal’s Arch (Fig. 1A). It was gray/white and faded looking, however upon retrieval and closer inspection, it had originally been fluorescent green and was now fully faded from prolonged sun UV exposure. The unfaded color was visible in the knot, however it was very difficult to see without close inspection. The webbing felt old and stiff when dry, but when wetted, it felt significantly better and looked much less faded (had one not known it was originally green). We measured the breaking strength of a loop of the webbing in three tests and it broke at 2.54kN, 3.56kN, and 3.20kN with only one break being at the knot. Video taken by Chelsea at the tree before Gavin began rappelling shows both climbers clipped into the single loop of webbing which was not backed up. Both climbers were in good spirits and unhurried in their preparations to bail.

Climbing gear from the party was scattered throughout The Trough, with the highest item being an alpine draw midway between the first and second belay on that route. The lowest confirmed item was Chelsea’s helmet. Locations where certain items were found are shown above in Figure 1.

Two climbers witnessed the fall, and had both stated they were fairly certain they had seen a rock falling with the two climbers between the size of a trash can and half a refrigerator. We identified a rock with recent damage below The Trough that was around 3 ½ x 3 x 1 ½ ft in size. We also identified fresh impact sites on slabs above the boulder where it likely fell.

There were two parties that witnessed the accident. One party of two was bailing from Super Pooper and another party of four had completed Left Ski Track and was sheltering near the top of The Trough. Based on their accounts we have built a timeline of events and conditions.

Based on the physical evidence and witnesses, we believe that Chelsea and Gavin had climbed Dave’s Deviation and continued towards Upper Royal’s Arch via either Gallwas’ Gallop or Piton Pooper. As the storm moved in, the party reached the pine tree close to the first pitch of Upper Royal’s Arch and, given the conditions, decided to rappel rather than continuing upwards. By the time they reached the pine tree, the webbing was wet, and as such, it would have been more difficult to ascertain the quality of the webbing without closely inspecting the knot and seeing the original color. They likely clipped into the webbing with their personal anchor systems. As the terrain below the pine tree is sloping with only small areas to stand, it is likely they would have both been weighting the webbing. They then tied stopper knots into their rope, clipped it through the two wire gates opposite and opposed and dropped the ends. Gavin was first on rappel and descended a few feet before the webbing broke. As it was a single strand with no redundancy, both climbers fell. There was no evidence of rockfall hitting the tree or surrounding rock, and the webbing could not have been cut by a rock. As such, we think it most likely that the falling rock reported by the witnesses was dislodged somewhere on their fall.